Yes Our Weather Is Amazing in Fort Myers 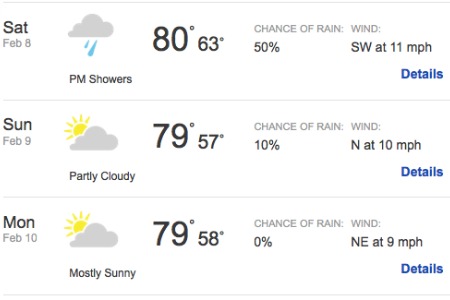 Who doesn’t want to escape this icy cold winter?  Aren’t we all tired of shoveling snow and seeing daily temperatures dip below freezing?  The Collier County Tourism Bureau is raising billboards in Chicago, Minnesota and other cold climate areas to call attention to sunny Southwest Florida and lure tourists to Naples and Fort Myers for a winter getaway. Tourism adds big bucks to Collier County, pumping an estimated $885 million into its economy.  The Lee County Visitor and Convention Bureau is in the game too---and placing radio ads and holding a Facebook contest to promote Southwest Florida to Northerners facing a bitter cold winter.  The area’s tourism and hospitality industry depends on tourism, as a whopping $2.7 billion annually comes into Lee County’s coffers and spreading visitors’ dollars to its hotels, resorts, restaurants, and shops and throughout its local economy. This region of the country---blessed with good weather---has been attractive to Northerners who want to escape snow and harsh winters.  Visitors flock to sunny Florida for accommodations near the beaches.  More and more Florida marketers and advertisers are using social media to trumpet the high temperatures in the region and react quickly when the weather up North deteriorates.  For example, billboards up North post digital air temps in Southwest Florida.  Average temperatures in Fort Myers in January and February range from 64° to 75 °.  Wintertime is the peak tourist season, which runs from October through April.  The winter months of December, January and February are the coolest climates and driest weather of the year, with January daytime temperatures dropping to 75°, which seems like a heat wave when you’re living in daily 20° temperatures!
Tags: Fort Myers, Southwest Florida