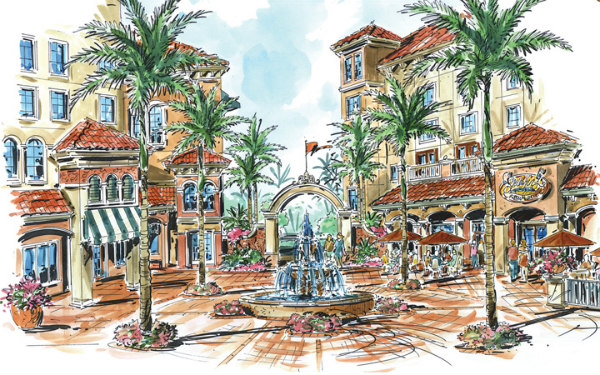 A major new mixed-use development appears to be once again headed to Downtown Cape Coral, one that could drastically change the look of the area in the coming years. Dubbed Village Square, the project is expected to include a full city block of high-rise condos, restaurants, shops, offices and a parking garage. First approved about eight years ago, the long awaited, $130 million dollar project includes room for two eight-story residential towers topping another six levels of parking, eventually making room for more than 1,000 vehicles. As well, it also features a seven-story building and some interconnected, mixed-use buildings, all in a Mediterranean-style. This includes more than 150 multifamily units and plentiful retail space, available for restaurants, shops and offices. The pedestrian-friendly site will also feature some sweeping views of the nearby Caloosahatchee River and the city from some of the upper floors of the buildings, with all of the buildings focused around a public square. While there’s no concrete projection just yet for actual construction of the new buildings, it’s likely the city council will take up consideration of the project plan again in early September of this year. It’s expected that demolition of three existing buildings at the site could then take place within about 18-months after that. One of the first structures that could go up is the parking garage to fit in with the city’s streetscape project. It’s a longtime coming for the downtown project, which first gained interest from city leaders in the mid 2000s. Since then the project’s faced several extensions over the years, stalled for a time due to the economy. Even so, many area leaders and residents of Cape Coral are eager to see the project finally push forward, with hopes for real progress at the site within the next couple of years.
Tags: Cape Coral, Cape Coral CRA District, New Construction, village square