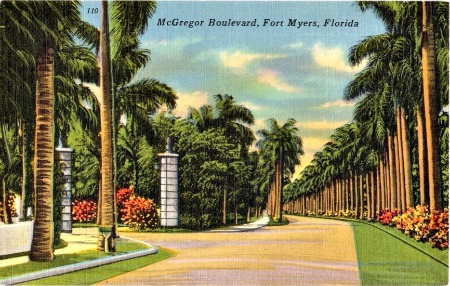 Not many people can say they "made the world a little more beautiful" but that's the legacy Tootie McGregor, one of Fort Myers' "founding mothers" left to her beloved Fort Myers. Tootie is credited with converting Riverside Road from a dirt cattle trail to the elegant, tree-lined McGregor Boulevard that stands today, among other contributions to the Fort Myers economy. A bust of Tootie adorns the Harborside Event Center while the fountain gracing the front of the Fort Myers Country Club was donated in her honor. Much of Tootie's life is the stuff of fairytales. Born "Jerusha Barber" to middle-class parents in 1843, she later married an ambitious salesman by the name of Ambrose McGregor. Although they scrimped and saved in their first years of married life, Ambrose went on to become the president of Standard Oil. Their only son, Bradford was sickly so the McGregors took doctors' advice and moved to Florida for the warm winters. They fell in love with Fort Myers, lured by the tarpon fishing, and purchased the home next to Thomas Edison's in 1892. When McGregor died at 57, his fortune was valued at $12 billion in today's economy. Despite her immense wealth, Tootie still couldn't save her son and directed much of her energy and fortune to improving Fort Myers after Bradford died. Tootie paid to have what was then known as Riverside Avenue paved and widened in exchanged for it being renamed for her husband, Ambrose McGregor. Tootie also quietly financed the Bradford Hotel, named for her son. After remarrying a childhood sweetheart, Tootie and her second husband, Marshall Terry, donated 40 acres of what would eventually become Terry Park. Today, Terry Park is better known as the site of spring training for a number of Major League baseball teams, as well as many notable Florida League players. In 1912 following Tootie's death, Terry donated a fountain to the city inscribed with Tootie's words, "….I only hope the little I have done may be an incentive to others to do more."
Tags: Fort Myers, Mcgregor Boulevard