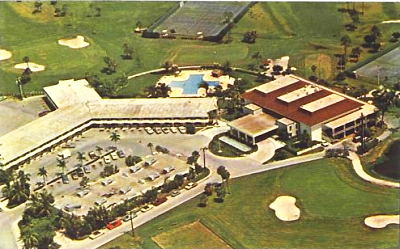 The Cape Coral Country Club area is a neighborhood in Southeast Cape Coral with a history that dates back to the early days of the Cape.  Cape Coral developer Gulf American Corporation built the 175-acre Country Club as well as the Yacht Club to use in their marketing efforts to sell vacant lots.  The Country Club featured a 100-room hotel where the Banyan Trace condo development is now located. In the early days of Cape Coral, the Golf Club served as the centerpiece of much of the social activity in the community.  At the time it opened in the mid-1960s, the course and clubhouse were the recognized as the most luxurious between Tampa and Miami.  The club hosted the 1972 NCAA men's golf championship  which featured a showdown between Ben Crenshaw and Tom Kite.  The club has also hosted a variety stars including Roy Rogers, Count Basie, Tommy Dorsey and John Cameron Swayze. The Country Club neighborhood around the club is bounded by two of Cape Coral's revered gulf access waterways, the Rubicon and San Carlos canals.  Housing options in the Country Club area include condos, town homes and single-family homes, 170 of which abut the the now closed golf course.  Area residents are hopeful that with the real estate market rebounding in Cape Coral, a new owner will emerge to revive the historic course. If you are interested in exploring home or condo ownership options in the Country Club area, here is a resource to view active Cape Coral Country Club real estate listings.
Tags: Banyan Trace, Cape Coral Country Club, Cape Coral CRA District, Gulf Access