The Boat-A-Long Is A Holiday Tradition in Cape Coral 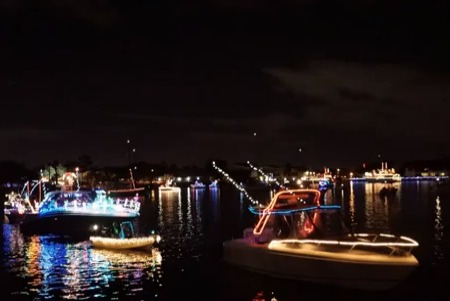 Boats lit up the waterways this week in the 37th annual Holiday Boat-a-long at Four Freedoms Park in Cape Coral.  Approximately 100 illuminated boats participated in this Cape Coral tradition, and all were decorated in merry holiday style with lights, elves, costumes, and jolly captains as Santa Claus.  An elaborate fireworks show lit up the night sky as the boats sailed by. Beginning at Four Freedoms Park, parade watchers gathered and watched the boats in the Bimini Basin as they sailed their way through the canals of south Cape Coral.  Festivities included live holiday music and entertainment, decorated trees, Christmas crafts, and food and drinks for sale. This is a fun family event Florida-style.  Four Freedoms Park is in Cape Coral on Tarpon Court.  The event started in 1976 by the Hahn family, who lived on Cape Coral’s Bimini Basin, and began organizing a group of boats to sail in full Christmas décor and parade around the basin.  The event was successful and thus began a new holiday tradition every year in Cape Coral.  Families who attend gather at the park’s beach with folding chairs and blankets to watch the boats display their creative decorations.