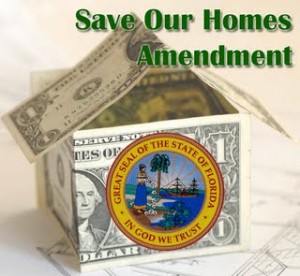 The Sarasota Herald Tribune has an in-depth view of the irony unfolding in Florida where tax laws that have traditionally stuck it to snowbirds are now actually favoring them. The Save Our Homes Amendment, which was passed in 1993, was put in place to limit changes in home valuations for full-time homesteaded residences.  The purpose of this amendment was protect Floridians from being taxed out of their homes as values increased over time. This amendment did not protect part-time snowbirds from valuation increases and their properties adjusted in value every year with the market.  The effect of this was that snowbirds were paying significantly higher taxes for like properties even though they are part-time residents. The Save Our Homes Amendment also limits downward reductions in home valuations to 3% annually for homesteaders.  Non-resident valuations have dropped with the market, but residents are capped, creating a scenario where the snowbirds are seeing huge reductions while full-time residents are not.  It is rather ironic that the designers of the Save Our Homes Amendment must have never envisioned a scenario where property values would drop as dramatically as they have over the past few years. Hopefully the taxpayers of Florida will collectively move to repeal this unfair tax act and normalize the valuations of all Florida property.
Tags: Demographics, Save Our Homes, snowbirds