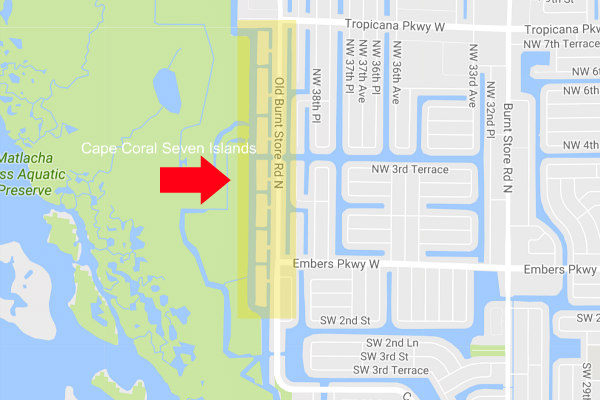 A major redevelopment plan is set to reshape Northwest Cape Coral, potentially turning nearly 50 acres into a shopping, dining, entertainment and housing destination. The Seven Islands project now has the go-ahead from the Cape Coral City Council to construct buildings of up to eight stories, along with commercial properties, parks and a marina. The Seven Islands project includes the acreage from a series of “islands” and dozens of adjoining properties found along Old Burnt Store Road. Most of the Northwest Cape, where the project is slated to go in, is currently zoned single-family residential as well as residential development. For some time, though, local leaders have been hard at work trying to figure out what it would take to develop the land that was at one time slated for additional residential development in Cape Coral. When the real estate market busted the city picked up the island acreage and adjoining parcels of land in foreclosure. Now that a rebounded real estate market is evident, the city is eying turning its city-owned land into a larger investment for the entire community, likely with the goal of boosting the local economy and boosting the intake of tax dollars. With the latest decision on the scale of the project decided, the city will next have to decide how to handle the actual development of the property, whether to do it alone, go into a public-private partnership, lease the property off to a developer or turn it over to a developer completely once the infrastructure goes in. While some area residents have raised concerns about the project, from the potential impact on the environment to more noise and traffic, city leaders see it as something that could draw people more to the community while positively reinforcing the local tax base. It’s a project that will no doubt be closely watched by area residents in the near future.
Tags: Cape Coral, New Construction, old burnt store road, seven islands, Waterfront