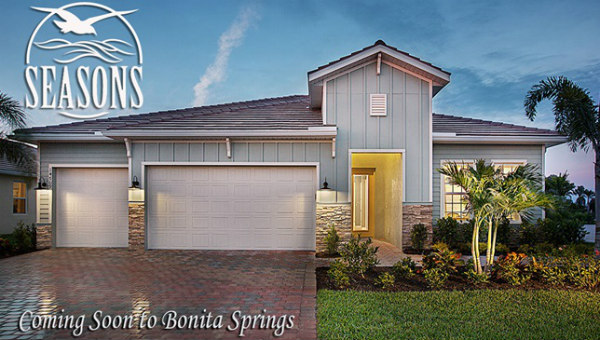 A brand new community is coming to Bonita Springs with the inclusion of Seasons by DR Horton. The community of single-family homes opens up for sales sometime later this fall, with some residential options ranging upwards of 3,000 square feet of living space. New buyers can expect to find open floor plans including both single- and two-story designs. Homes will range from the 1,800 square foot Clifton floor plan with two-bedrooms and two-baths, to a slightly larger Delray design with three-bedrooms and two-baths. As well, other floor plans include the single-story Kaden with 2,200 square feet of living space, including three-bedrooms and two-baths. A bit larger is the Abbey. It offers 2,300 square feet of living space, including three-bedrooms, 2.5-baths and a three-car garage. The largest single-story floor plan currently available is the Wheaton. With 2,500 square feet of living space it also includes three-bedrooms, 3.5-baths and a three-car garage. Meanwhile, the available two-story design is the Easton from DR Horton. It includes more than 3,100 square feet of living space, with room for three-bedrooms, 4.5-baths and a three-car garage. As well, planned amenities at Seasons range from a beach entry swimming pool with added lap lanes to a fitness center. In addition, there will also be bocce ball courts, tennis and pickleball, plus a clubroom for events and functions. Seasons will additionally include space for a walking trail for added outdoor recreation. Eventually, the site will be home to around 500 single-family residences plus dozens of acres of lakes. Found right on Bonita Beach Road, the new Seasons community sits just a few miles from I-75, plus not far from swimming and kayaking at popular Lovers Key State Park. As well, you’ll also find several options in dining, shopping and entertainment just a short distance away from the new community of Seasons.
Tags: Bonita Springs, D R Horton, New Construction, seasons