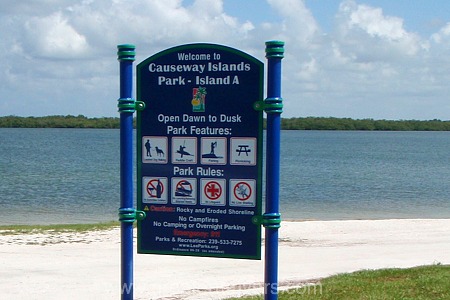 The spoil islands---linking the mainland to Sanibel-- are the two islands between the bridges on the causeway that are called spoil islands.  Located on SR/CR 867, the causeway goes through San Carlos Bay from the mouth of the Caloosahatchee River that allows both Bay and Gulf access.  As you travel from the mainland towards Sanibel Island, you will pass a tollbooth then cross over a bridge and arrive at the first island; if you continue driving, you will cross another bridge and arrive at the second island. The spoil islands are popular beaches for visitors to fish, swim, picnic, canoe, kayak, wind surf, kite board, shell, sunbathe and relax.  There are restrooms available, water fountains and picnic tables.  Grilling is permitted so you can bring your own.  The Sanibel Island Causeway beaches are also a great place for dolphin watching. Originating from dredged material that has been extracted from the ocean, the spoil islands consist of the dredged sediments deposited in the water to create new islands or to add to existing natural islands.  The Sanibel Causeway spans San Carlos Bay and is nearly 3 miles long and includes the two spoil islands operated as parks by Lee County.  The original causeway opened in 1963 then the islands were built as part of it; a new causeway was re-built in 2007 using the same spoil islands.  To get to the causeway from Fort Myers, take US 41 to Gladiolus Drive,  and then to Summerlin Road which feeds into the Sanibel Causeway.
Tags: Sanibel, sanibel causeway