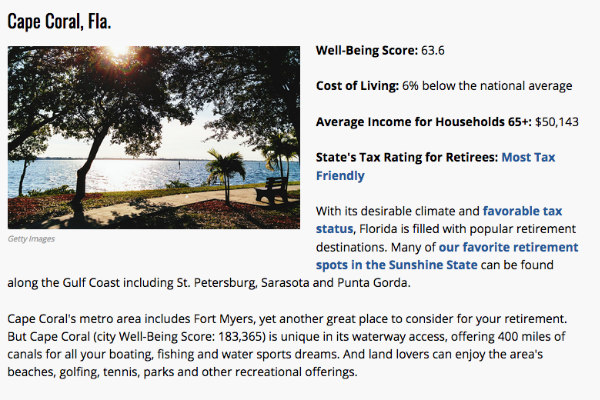 A fantastic destination for those of all ages, it appears Cape Coral is an especially good choice for retirees. Kiplinger just announced its list of “10 of the Happiest Places to Retire in the U.S.”, with Cape Coral nabbing a top spot. Kiplinger based its research on millions of surveys collected across the nation that formed a Well-Being Index. Factors taken into account included such things as purpose and motivation of residents, financial security, physical health, social relationships and a sense of community. Those places ranking highest were then categorized as having happier residents. Kiplinger furthered the study by factoring some of that information into its list of the best places to retire, coming up with retirement locations that therefore ranked the highest in regards to overall well-being of the residents who live there. Specifically, Cape Coral received a high overall score for well-being, complimented for its hundreds of miles of canals, ideal for fishing, boating and other watersports. As well, the city was also mentioned for its beaches, parks, plus its access to outdoor recreation like tennis and golf. Kiplinger additionally recommended considering the larger metro area, including Fort Myers for retirement. As well, it made mention of the state’s numerous retirement destinations, its sunny weather and its generally tax-friendly environment for retirees. In past years other publications have also ranked Cape Coral as one of the best places to retire, noted again for its tax policy, its warm climate and affordability. With all of its available waterways the city also makes it extremely likely to find a home with water access, plus opens up residents to an array of choices in recreation, shopping and cultural attractions. As well, the city also sits within a short distance of other Florida sites and attractions, providing plentiful options for those of all ages to settle down in Cape Coral.
Tags: 55+, Cape Coral, Demographics