Punta Rassa Has A Colorful Past 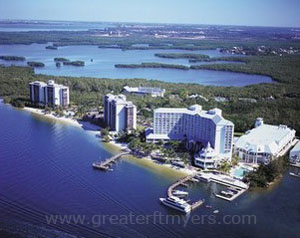 On a stretch of land less than 15 acres along the Caloosahatchee River, there stands a peninsula lined in palm trees called Punta Rassa.  It is a beautiful area on SR 867 just before you cross the bridge for Sanibel Island that is highlighted by county recreational docks, and a boat ramp, condominiums, a yacht club and a 4-star resort and spa.  But a rich history of colorful characters marks Punta Rassa, one with Calusa Indians, Spanish explorers, cowboys, soldiers, telegraph operators and commercial fishermen.  The location was named “smooth or flat point,” Punta Rassa, by the Spanish Conquistadors in the mid-16th century, who unloaded cattle in the area. In the old days, commerce and trade depended on boats and barges leaving from Punta Rassa.  Ferry service from Punta Rassa took homeowners and tourists between the mainland and Sanibel Island.  Ferry service continued until the first Sanibel Causeway and bridge opened in 1963.  In the 1830s, Punta Rassa became crucial to shipping beef cattle from Florida to Cuba.  Florida cattlemen supplied combatants during the Seminole, U.S. Civil and Spanish-American Wars.  Punta Rassa now is known mainly as a popular boat ramp for boaters coming to Fort Myers Beach and the site of the lavish Sanibel Harbour Resort and Spa. In the Iona section of South Fort Myers, next to the Sanibel Causeway at the mouth of the Caloosahatchee River, is Sanibel Harbour.  The Sanibel Harbour Towers are twin high-rise condo buildings located at the 4-star, 4-diamond Sanibel Harbour Resort and Spa.  These buildings house 160-units and offer magnificent views of San Carlos Bay and Sanibel.  Amenities include a sandy Gulf-front beach, pools, jogging path, biking, fishing pier, Gulf access marina and full-service resort and spa.
Tags: High-rise, Iona, punta rassa, punta rassa condos, sanibel harbour towers