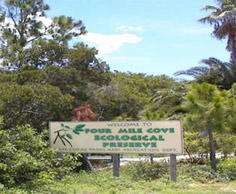 A residential project that could have a similar impact as Tarpon Point or Cape Harbor is underway in an area of Cape Coral and N. Fort Myers just north of the Four Mile Ecological Preserve. The project coined Paradise Preserve is targeted to have over 1600 residential units spread across two properties, including the former Lochmoor Country Club. The project will include both high-rise buildings along the river as well as single family homes. Amenities for the project include both gulf access boating as well as a golf course. This is an exciting project for that end of Coral and will certainly pull up the surrounding home prices as Tarpon Point and Cape Harbor did in the southern end of Cape Coral. Here's a request Mr. Developer, how about some fine dining open to the general public at Paradise Preserve.
Tags: Cape Coral, Luxury, Paradise Preserve