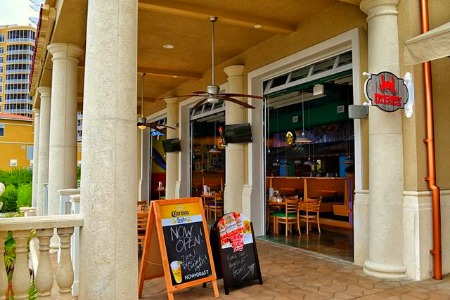 Nearly 16 years after popular Pincher’s Crab Shack opened its first restaurant in a Bonita Spring strip mall, owner Tony Phelan wanted to bring his fresh seafood to other locations in Southwest Florida and recently opened his 9th restaurant at Tarpon Point in Cape Coral.  Serving up stone crabs and a host of seafood and non-seafood appetizers, soups, sandwiches, entrees and pastas, Pincher’s Crab Shack is well known for its fun, casual and tropical atmosphere.  The doors opened in November at 5991 Silver King Boulevard at Tarpon Point for lunch and dinner.  With 50 tables at this location, Pincher’s Crab Shack at Tarpon Point includes outdoor waterfront dining by the marina. Pincher’s is a favorite of both locals and visitors to Southwest Florida.  Tony Phelan’s restaurants look like old seafood shacks that you would find driving along the Gulf Coast; but he decided to bring the Gulf of Mexico to places away from the coast where most of the population lives.  He has decorated all of his restaurants with kitschy Old Florida knick-knacks, and recycled metal barrels for his bars and discarded wood to use for his tables.  As the family business grew, Pincher’s became known as the #1 place to find Florida stone crabs and other fresh seafood.  The crabs he serves come from nearby Pine Island on the Gulf within a couple of hours from all of his restaurants to guarantee the freshest seafood. Other restaurants owned by Phelan and his family: Historic Tin City in Naples, Sarasota’s Lakewood Ranch and popular Duval Street in Key West.  Today the Phelans own 9 Pincher’s locations, including one at the Gulf Coast Town Center in Naples, Fort Myers Beach Tiki Bar and the latest, Tarpon Point in Cape Coral.
Tags: Cape Coral, Tarpon Point, Waterfront