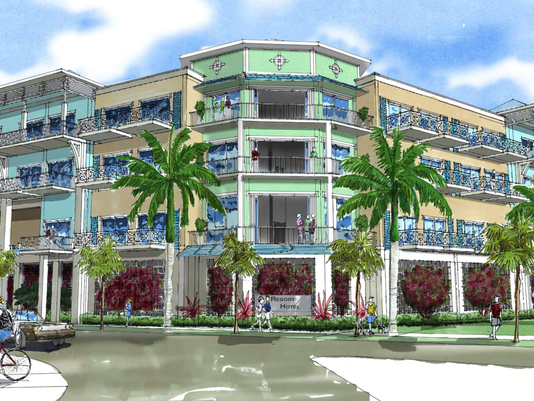 Photo: TPI Hospitality A new development plan for the Times Square project on Fort Myers Beach has just been released, this one a scaled down version of the original that some deemed too big for the location. While the original plan called for four hotels, a mall, seawall and a boardwalk, the new proposal of Times Square is more compact, a plan the developer hopes local leaders and residents will get behind and support now and in the near future. The new plan caps the height of the resort at three-stories, while bringing more than 300 new hotel rooms to the area. It also brings skywalks over to the resort’s nearby beach club, complete with a lazy river open to the public and to resort guests. Meanwhile, there are plans to repurpose the old Cigar Hut building on site and to design the project with a more beach-friendly, Key West-vibe. It’s said that the new renderings are informational for now and that the plan is still evolving, but they show that the hotel part of the resort is planned for the bayside with the walkway set to connect to the project’s beach club on the ocean side. This part of the new plan helps to address some of the previous concerns some people had with traffic, while the newly released proposal also helps alleviate parking woes, as parking is set to be constructed on land already owned by the developer, and incorporated into the resort’s overall design. While the new plan reportedly does not include using a nearby park, developer Tom Torgerson of TPI Hospitality does need to make an application to the town for some land in Times Square currently owned by the county. That application is expected to come next month, setting the stage for the next possible step of a major project aimed at bringing new development to Fort Myers Beach.
Tags: Fort Myers Beach, times square