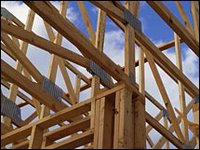 Sales of new homes tumbled 11 percent in November, the biggest drop in more than a decade, in another sign pointing to a slowdown in the nation's real estate market.

The decline, which was larger than forecasts from Wall Street economists, was from record sales in October. The last time there was an 11 percent drop in new home sales was February 1995.

The Census Bureau reported Friday that the annual pace of new home sales dipped to 1.25 million in November from the record high of 1.4 million in October, which was revised slightly lower. Economist surveyed by Briefing.com had forecast sales would slow to a 1.3 million annual rate.