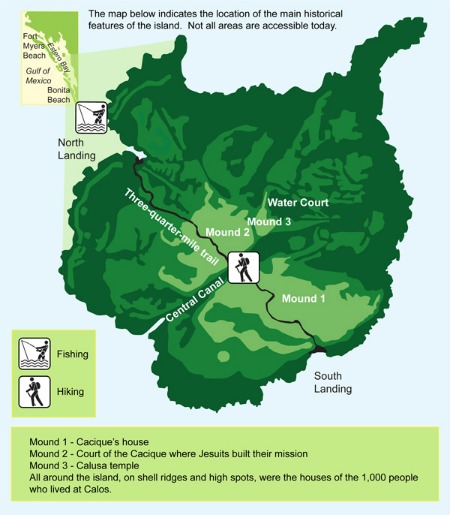 Above the waters of Estero Bay, the 30-foot shell mounds and ridges of Mound Key is a man-made island covered by mangrove trees. This island’s mounds showered with an abundance of seashells, fish bones and pottery have been around since prehistoric Native Americans created the island. Mound Key was a meaningful site of the Calusa Indians and thought to be its ceremonial center when the Spaniards attempted to colonize Southwest Florida. There is a fort and the first Jesuit mission in the Spanish New World on the island. The only access to Mound Key is by boat; a trail runs the width of the island with interpretive displays. It is a protected archaeological site. A Florida State Park located in Estero Bay near the mouth of the Estero River, Mound Key was added to the U.S. National Register of Historic Places in 1970. The island is only accessible by boat a few miles from the Lovers Key State Park or Koreshan State Historic Site. Mound Key was created over 2,000 years ago by the Calusa tribe, originally a low-lying oyster bar with abundant fishing on Estero Bay. The Calusa were hunter-gatherers so the site, rich in marine food, was attractive as well as an easy food source. The large amount of mounds, water courts and canals still exist. Today, the 125-are Mound Key island is known for its boating, fishing and wildlife exhibits.
Tags: Estero, Estero Bay, Mound Key Archaeological State Park

Osprey Cove Offers Convenience and a Wealth of Amenities

For convenience and a wealth of amenities, come home to the maintenance-free possibilities of Osprey Cove in Estero. This gated condo and ...Read More