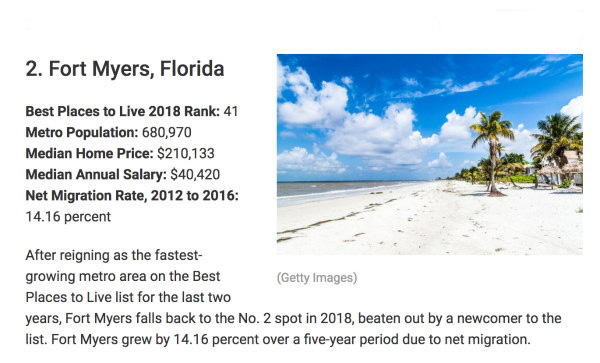 Lee County is no doubt a great place to live, and people are certainly taking notice. The county just ranked near the top of the list when it comes to the “The Best 25 Places People are Moving to in 2018”. That honor comes from U.S. News & World Report, which recently put Lee County in second place, behind only Myrtle Beach, South Carolina. While specifically mentioning Fort Myers in the ranking, the data used in the study is said to be reflective of the entire county. The latest ranking takes into account the nation’s 125 most populous metro areas. Analysts looked closely at each metro’s net migration over five years, in this case using U.S. Census Bureau data from 2012 to 2016. A number of the locations to rank high are not only desirable destinations, but also it’s pointed out, like Florida, don’t have a state income tax. The publication also suggests the attraction could be tied, in some cases, to affordable housing and a hot job market. Some, though, credit aging baby boomers for at least part of the distinction. As many of this particular generation look for their next home, the State of Florida easily fits the bill. Currently more than 21 million people live in the state, with an expected 22 million by 2020 and possibly 26 million another ten years after that. As for Lee County, much of the anticipated growth could happen in Cape Coral and Lehigh Acres, both places with land still to develop. Lee County is hardly the only part of Florida to score well on the list. A number of Florida cities are listed out in the top 25. Other contenders for 2018 include Sarasota, which came in at number three and Port St. Lucie, which took the number six spot. Melbourne came in at number 10 on the list for the year.
Tags: Cape Coral, Demographics, Fort Myers