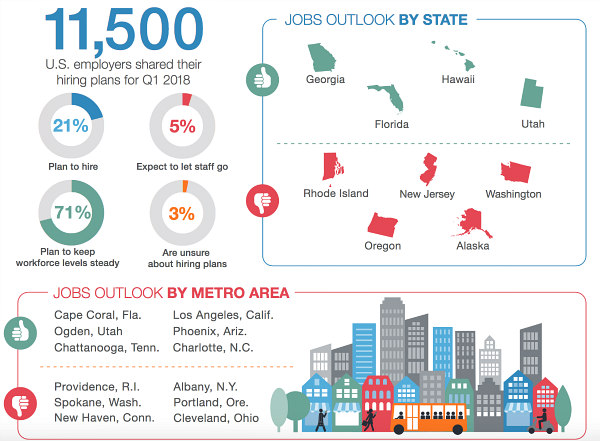 There’s more good news for Fort Myers, as the area just received high marks for its strong job market. According to the recently released Employment Outlook Survey from ManpowerGroup, the area of Fort Myers and Cape Coral boasts the best employment outlook in the entire country, meaning good news for those hoping to gain new employment in the New Year. ManpowerGroup found that about one-third of the employers it surveyed in the area plan on hiring additional employees during the first few months of 2018. While few area employers indicate they plan on reducing employees during this time, the majority of those left expect to keep the same number of employees on the payroll. Those numbers seem to be in line with other studies, particularly those focused on the unemployment rate. Some publications recently report the unemployment rate in Lee County sitting at just over three-percent, a much lower rate than seen in other parts of the country. The expected early 2018 hiring pace for the area is slightly lower than what’s been seen in the last quarter of 2017, but nearly identical to levels seen during the same time period at the beginning of 2017. The highest job prospects in the area are reportedly in the fields of construction, transportation, manufacturing, plus some jobs in hospitality, professional services and in government. To come up with its findings, ManpowerGroup surveyed more than 11,000 US employers, finding that about 21-percent of those overall are expected to add employees in the coming months. That’s good news as it’s the first time in a decade that US employers have reported such a high intention for hiring new workers. When looking nationwide, the top job prospects appear to be in hospitality and leisure, transportation, professional services, retail trade, manufacturing and construction, with many of the positions likely in need of highly skilled workers. Congratulations to civic and business leaders in Cape Coral and Fort Myers for establishing a business-friendly economy poised for growth this year and into the future.
Tags: Demographics