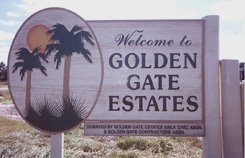 A surprising announcement from Collier County officials suggesting that Golden Gate Estates will reach full build-out by 2016. Golden Gate Estates has approximately 100,000 lots and about 50 percent now have homes built on them. Southwest Florida is home to several massive plated communities including Golden Gate Estates, Cape Coral, Lehigh Acres, Northport, and Rotunda. As far as I know, this 2016 build-out projection positions Golden Gate to be the first of these communities to reach capacity. It would be an interesting exercise to estimate the total amount of capital gains to be realized on all the vacant lots in these five Southwest Florida plated communities prior to 100 percent build-out. It is probably something like 900,000 lots x ($100,000 average price -$3,000 average initial price) = $87.3 billion. Estates expected to hit capacity in '16, study says [Naples Daily News]
Tags: Golden Gate, Naples, Southwest Florida, Vacant Land