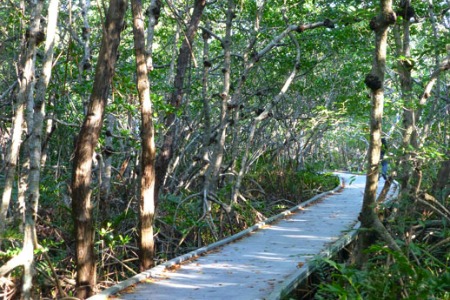 A fantastic way to explore the natural beauty of Cape Coral, Four Mile Cove presents hundreds of acres of preserved wetlands. While much of the region is already developed, the mangrove forest of Four Mile Cove Ecological Preserve offers up a real treat for visitors and locals alike. The preserve was actually a mandate from the State of Florida to preserve the land from future development. It’s now leased back to the city for operations and known as the largest such preserved space in Cape Coral. The park presents the opportunity to kayak through the water, go for a hike on one of the nature trails or simply take in the surroundings from one of the two observation piers. This includes the opportunity for spotting area wildlife such as eagles, herons and raccoons or visiting a special visitor’s center to gain more insight into what the preserve provides and how best to experience it. Lined by towering trees, the boardwalk and dirt trails of the preserve allow for incredible views of the river and of Fort Myers. You’ll also find several benches along the way, giving the opportunity to take a short rest or just take in the surroundings. It’s just over a mile to take the loop, starting and ending at the visitor’s center. As for kayakers, Four Mile Cove Eco Preserve is just as unique. It’s even possible to rent a kayak on site during select months of the year at the rental shop. You’ll find it close to the main entrance. Keep in mind, children under the age of six are not allowed to kayak, but planned group kayaking is available and there are also some planned hikes during certain times of the year. The Four Mile Cove Eco Preserve is open all year-round, from morning until dusk and is located in Cape Coral along the Caloosahatchee River, just north of the Gold Coast and Veterans Memorial Parkway.
Tags: Cape Coral, Recreation