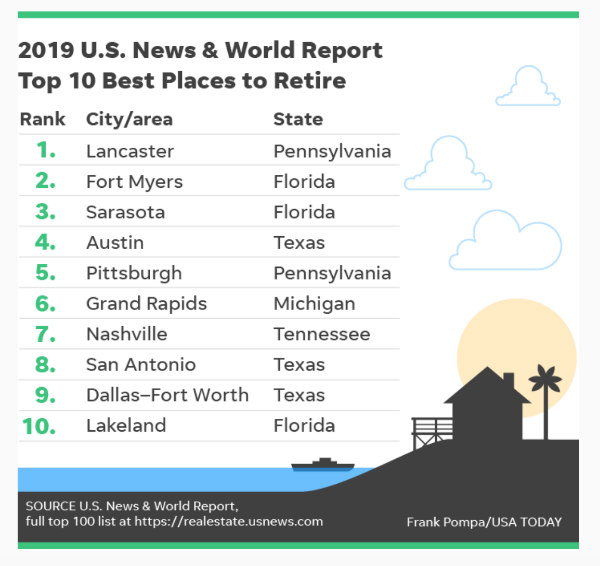 A great place to live, work and play, Fort Myers also just gained a new honor when it comes to topping the “100 Best Places to Retire in the USA”. The ranking from US News puts Fort Myers in the number two spot, noted for its growing population, yet its small town-like atmosphere. US News uses several categories to come up with its list, including overall desirability, access to quality hospitals and affordability in housing. Particularly regarded for its downtown restaurants and shops, the publication also makes mention of the city’s many museums and parks, as well as its art galleries, historical sites and festivals. In addition, Fort Myers is praised for its proximity to outdoor recreation, with area beaches prime for boating, kayaking and fishing. As well, Fort Myers offers easy access to the arts, with several theaters and a performing arts center for viewing live concerts, musicals and plays. The popular River District is a big draw for the area, as well, with abundant offerings in shopping, dining and entertainment. In addition, you’ll find several area golf courses for added recreation. Supplemented by plenty of sunny skies and warm, year-round temperatures, the combination has, no doubt, helped attract retirees to the area, as more than 25-percent of area residents are older than 65. The Fort Myers area also has many wonderful communities that cater to active 55+ adults.  Two other Florida cities made the top 10 list, including Sarasota at number three and Lakeland at number 10. The number two ranking for Fort Myers is a pretty good jump for the city, which was ranked number 15 last year in the same study. US News also recently ranked Fort Myers relatively high when it comes to its list of the “Best Places to Live”. In that particular study the city came in at number 41. It’s noted that Fort Myers is also home to a number of young families and millennials.
Tags: 55+, Demographics, Fort Myers