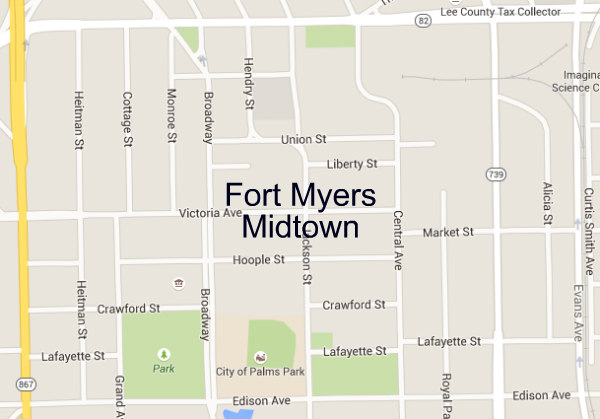 Redevelopment plans for Midtown Fort Myers are shaping up. City leaders have started planning to revitalize the area around central Fort Myers and City of Palms in south downtown, with an eye to bring new businesses to the district. The area borders U.S. 41, Dr. Martin Luther King, Jr. Boulevard and Evans and Edison Avenues. There are many unused lots, empty streets, and vacant properties in this location. The area will be rebranded, and renamed, as Midtown for its makeover; it is attracting attention for future development with housing, office space and retail. Midtown is approximately half of the size of downtown, and just south of downtown. As Fort Myers city leaders work on future plans, Midtown will retain popular sights such as the City of Palms Park, the Imaginarium Science Center, the Skatium and the Fort Myers police station. As Midtown is an extension of downtown, local residents want to make sure redevelopment plans also keep in mind their concerns about parking, adding more transportation options and being able to walk from one place to another. Fort Myers city leaders heard from local Fort Myers residents and property owners who voiced their ideas and gave feedback to the Fort Myers Community Redevelopment Agency during a public meeting held earlier this month. Comments about a lack of parking in the area came up. Major challenges that the Midtown area face are vacant properties and sluggish development. Planners believe future mid-rise office buildings where companies will open locations downtown will attract other businesses, and restaurants and coffee shops will likely follow. City leaders hope more closed-up homes and businesses will be sold for newer developments like high-rises. Affordable housing will give downtown a stream of population that lives there and keeps it vibrant after regular work hours. Two additional public meetings will be held in August and October to lay out proposals and a final plan. Officials will present their recommendations for land use to the City Council in November. The city does have plans to upgrade aging infrastructure and pipelines, improve roads and zoning, and bring jobs to the area. If approved by the City Council, the name Midtown could become effective next year. Here is a resource to view Fort Myers Midtown real estate currently listed for sale.
Tags: Fort Myers, midtown, Urbanism