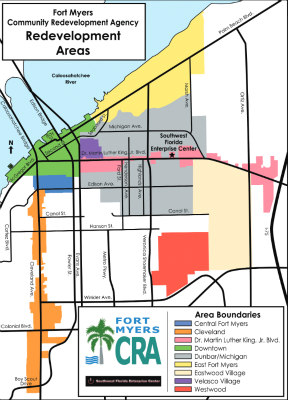 After three-decades of work, the Fort Myers Community Redevelopment Agency has greatly expanded its footprint in the city. Back in the 1980s, the Agency began as a way to redevelop a handful of blighted areas of the city in need of revitalization. That’s grown now to numerous new redevelopment districts within the City of Fort Myers. Originally, plans called for helping the commercial area of downtown, with recently released recommendations to continue the downtown CRA District for decades to come, along with mixing in neighboring midtown. The city uses CRAs to first define a blighted area and then used property value increases in the future to fund improvements for that same area. Supporters point out that’s led to private investment. In the downtown area, specifically, the extension means that developers are assured continued access in funding their projects with tax increment rebates for roughly another 30 years. By expanding the downtown district, it would then share access to those tax rebates with developers interested in the midtown area, as well. While the downtown district has been widely successful in the past, not all districts are raising enough revenue. With the proposal to combine downtown and midtown there’s also been an effort to combine some other underperforming districts with those that are raising revenue, thereby hoping to spur development in other areas of the city, as well. Some officials have raised concerns that without developer incentives, new development won’t happen in the city, but rather will be pushed out further to the county. With the incentives in check, though, it’s hoped that new projects will then translate to a larger tax base for the City of Fort Myers. Current redevelopment areas include Downtown, Central Fort Myers, Dunbar and East Fort Myers. There is also one in Westwood, Velasco Village, plus the Cleveland and Dr. Martin Luther King Jr. areas of the city.
Tags: Fort Myers, fort myers cra district, Fort Myers River District