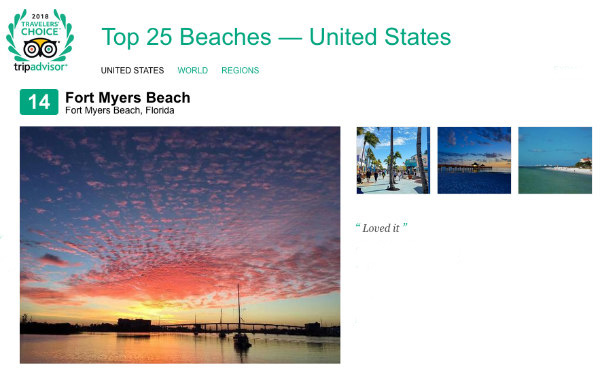 Already a favorite of locals and visitors, Fort Myers Beach is now on the list of the best beaches in the nation. While many Florida beaches make the list for 2018, it’s not hard to see why Fort Myers Beach is among the best. The latest ranking comes from TripAdvisor. Fort Myers makes the list for 2018 in the 14th spot, noted for its white sand and refreshing, shallow water and mild waves. A popular spot, especially during some of the busiest travel times of the year, Fort Myers Beach runs for a full seven miles along the Gulf coastline. Along with playing in the water and sand, other things to do at Fort Myers Beach include dining and shopping at Times Square or visiting the turn-of-the-century Mound House. In addition, some point out the hiking trails of Matanzas Pass Preserve or the popularity of annual events such as the Shrimp Festival. Other annual attractions in Fort Myers Beach include Taste of the Beach, where local restaurants serve up samples while competing for awards. That’s planned for early May of this year, with live music accompanying the food. This is in addition to the Pirate Festival, which sets sail later this fall. The family-friendly event is followed up by a Sand Sculpting Championship, which commonly brings in sculptors and visitors from around the world. There’s also the ever-popular Christmas Boat Parade to round out the holiday season, which just so happens to be celebrating its 30th year in operation this December. With a number of full-year and seasonal residents that call Fort Myers Beach home, the area includes around 6,200 residents, but brings in even more people during popular vacation times of the year. As for the latest ranking, Fort Myers Beach is also joined in the top 25 by other Florida destinations such as Clearwater Beach, Siesta Beach, South Beach and Fort Lauderdale Beach.
Tags: Demographics, Fort Myers Beach