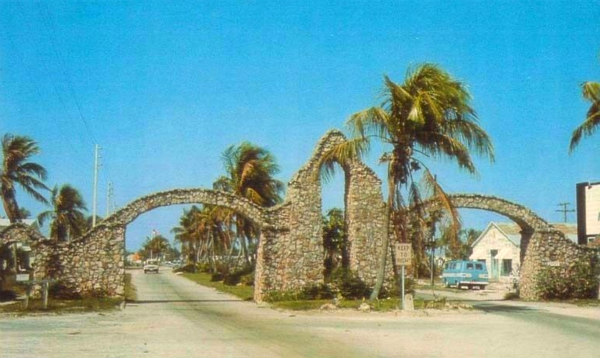 For more than a half-century, dual arches symbolically marked the entrance to Fort Myers Beach, before eventually succumbing to the need for new development. Now, decades later, though, it seems the infamous arches could be making a comeback. First erected in the mid-1920s, the Fort Myers Beach Arches were well known for welcoming people to the beach, and it seems nearly every local or visitor who passed through the arches had their own story to tell. The stone arches were such as staple in the community that generations of people not only remember them, but some are actually now hoping to bring them back to life. That’s because, sadly, for some, the arches came down in the late 1970s to make room for the Matanzas Pass Bridge, and with that modern achievement came an end to the old beach landmark. Now, all of these years later, a grassroots organization is focused on bringing the arches back to their formal glory. Group members want to build new arches close to the site where the old ones once stood. About a year and a half ago, proponents of bringing back the arches began soliciting support in getting their vision off the ground, soon creating conceptual drawings of their plans and asking for help with an artist rendering. The group is also accepting donations through its Facebook site, aiming to raise awareness about the arches, restore them and perhaps even enhance the surrounding neighborhood. Future plans to promote this include a music festival, currently slated to kick off next May. The entire project won’t be cheap, however, with some estimates suggesting that new arches could cost about $750,000 to construct. One solution is to take some of the rocks originally used in the former arches, and then add them to new rocks for the future structure. Currently, some of those original materials are reportedly sitting on San Carlos Island, but if all goes as planned they could someday once again mark the entrance to Fort Myers Beach.
Tags: Fort Myers Beach, historic