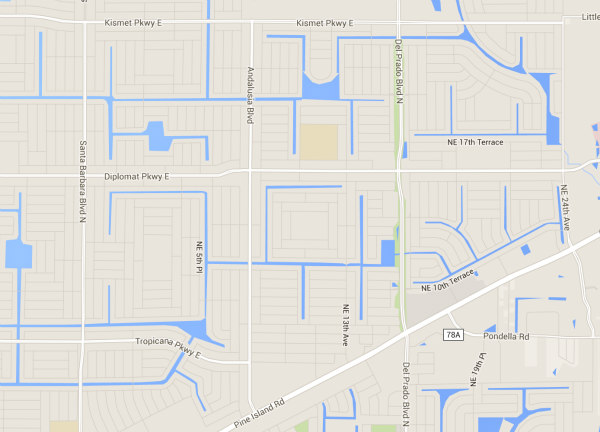 The perks of the linear road widening expansion a few years back bring to mind the popular use of Del Prado Linear Park by residents of Cape Coral. The linear park is developed along Del Prado Boulevard between Pine Island Road and Kismet Parkway as part of a city improvement project. The park’s amenities feature a 10-foot wide sidewalk that courses over four miles from Pine Island Road to Kismet Parkway on both sides of the road. It’s a picturesque and impressive park for walking, jogging, and biking. Park benches provide a comfortable resting spot or retreat for book readers and crossword puzzle aficionados. The stretch of Del Prado Boulevard has been widely praised by residents and visitors alike. Many see the North Cape Coral area as a gateway for economic growth. The road widening and linear park will positively impact the local economy. Motorists can drive on a wider street with more lanes to avoid traffic congestion, and pedestrians and other residents can walk safely without worries of oncoming traffic. The sidewalks are lighted for evening use of the park with street lighting above the paved exercise path. There are a total of eight fitness stations on the east side of the road between Diplomat Parkway and Kismet Parkway. The west side of the road goes around Lake Zurich, and features a Rain Garden approximately one mile north of Pine Island Road. Other amenities include man-made lakes, park benches, bike racks and dog waste stations.. It gives ample room for walking, stretching, jogging, dog walking, group exercising, and for fitness buddies to comfortably walk and talk side-by-side Del Prado now serves as a gateway to the city of Cape Coral. The linear park is part of the city’s Five Year Improvement Project that includes the widening of Del Prado Boulevard and three bridges on side roads. Del Prado Boulevard was widened in 2009 from four lanes to six lanes from Pine Island Road to Kismet Parkway. Residents of the area have since enjoyed Cape Coral’s linear park, as a result of a wider boulevard. Even birdwatchers can be found at Del Prado Linear Park. The park is a calm place to enjoy watching blue herons, pipits, ibis, and ducks, among an abundance of many-feathered friends.
Tags: Cape Coral