Castalina Under Development in Fort Myers 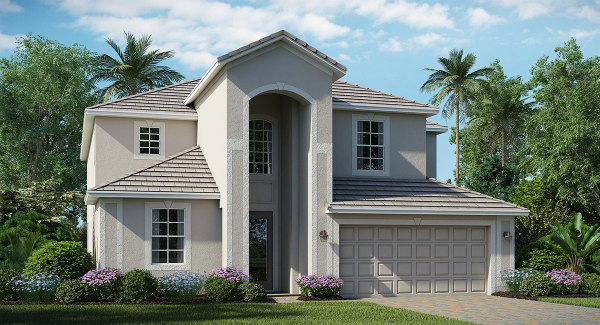 With homes currently under construction, and the availability of some move-in ready floor plans, the new Castalina community is currently under development in Fort Myers. Supplemented by the luxury of resort-style amenities, the new community offers up some impressive designs in executive-style homes and villas from Lennar. The villas start at around 1,400 square feet of living space, priced starting in the low $200,000s. With up to three-bedrooms and two-baths, the one-story villas also feature a two-car garage. Potential buyers also have the option of one of the executive homes of Castalina. Starting at around 1,600 square feet of living space, you’ll find at least three-bedrooms and at least two-baths. Meanwhile, some of the largest possibilities in the neighborhood from Lennar include more than 3,200 square feet of living space and the option of up to five-bedrooms. With the desirability of a single-story or a two-story design, a majority of the executive homes in Castalina start priced in the mid $200,000s, with larger floor plans priced starting in the low $300,000s. The new construction homes, however, are just part of the appeal of the new neighborhood. It also features such amenities as a sports court, extra green space, a playground and a swimming pool. In addition, the neighborhood sits conveniently close to area parks, nature preserves and beaches, as well as multiple options in dining, shopping and entertainment in the Fort Myers area. In addition, area golf courses are just a few miles away, as is I-75, making for an easier commute around the entire region. Other possibilities include the destinations of Captiva and Sanibel islands, a reasonable distance away from Castalina. It's just one of the communities in Fort Myers currently offering up new construction from Lennar, a more than half-century old company constructing homes across the nation, and in Southwest Florida.