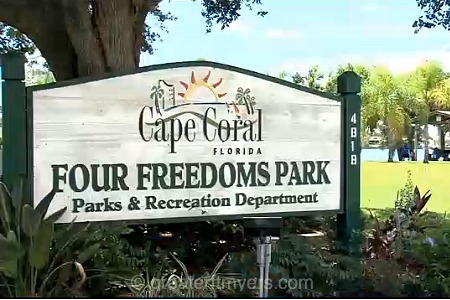 Cape Coral businesses are rallying behind a proposal to support a multi-million dollar canal development along the Bimini Basin in downtown Cape Coral. Nearly all major Cape Coral business organizations, for the first time, are standing in unison behind one project that could bring in millions of tourist dollars to an ideal commercial waterfront location in Cape Coral with its miles of canals and waterfronts. City leaders want to showcase Cape Coral’s 400 miles of canals to help make the city a destination. The proposal supports connecting two canals near Four Freedoms Park by creating a waterfront extension of the existing downtown. First up: a public-private partnership is necessary to back construction of a destination at Bimini Basin. Support therefore is needed from the community, local businesses, and investors to share the cost. The Bimini Basin project would connect the canal at Four Freedoms Park to a canal off Southeast 47th Terrace under Cape Coral Parkway. Supporters say the project could give a boost to Cape Coral’s economy through new revenue and more jobs, and increase property values as well. Plans call for a fixed overpass with sailboat clearance and a drawbridge for sailboat passing. Four Freedoms Park would serve as an anchor for commercial development of shops and restaurants. City Manager John Szerlag has told the City Council he will pledge $50,000 to study the feasibility of the project. The City Council needs to support it. Mayor Marni Sawicki has asked the University of South Florida to study the feasibility of a mixed-use development at the site. The group is exploring a project similar to the Miromar Town Center for the Cape Coral CRA District.
Tags: Bimini Basin, Cape Coral, Cape Coral CRA District, rubicon canal