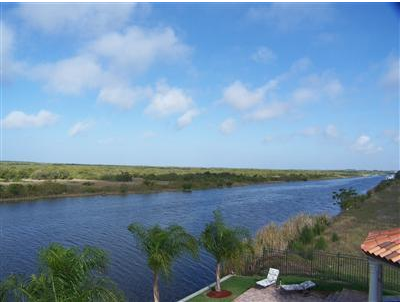 It doesn't get much better than living on a Spreader Canal in Cape Coral Florida.  These 200-foot wide canals form the western border of Cape Coral and are lined on the eastern shores with beautiful waterfront homes and on the western shores with stands of forever protected mangroves.  There are very few places in Southwest Florida with as beautiful a natural view as along the Spreader Canals. Many homes along the Cape's Spreader Canals have been configured with rear facing living spaces that residents use year-round to enjoy the passing boating traffic, dramatic sunsets over the mangrove stands and the viewings of Southwest Florida birds, fish and even manatees.  Some homes feature infinity edge pools which magnificently extend the pool view out over the wide Spreader Canal. The Spreader Canals are man-made and were developed in the late 1970's under a mandate from the Florida Department of Environmental Regulation.  Their purpose was to serve as a retention system for intercepting and releasing fresh water from the Cape Coral system of canals and distributing it through the mangrove areas for natural filtering rather than releasing it directly into Charlotte Harbour, Pine Island Sound and the Caloosahatchee River. The North Spreader Canal runs from just south of Caloosa Parkway in NW Cape Coral to Pine Island Road and the South Spreader Canal runs from just south of Pine Island Road to the Caloosahatchee River in Southwest Cape Coral.
Tags: Cape Coral, Gulf Access, north spreader canal, south spreader canal