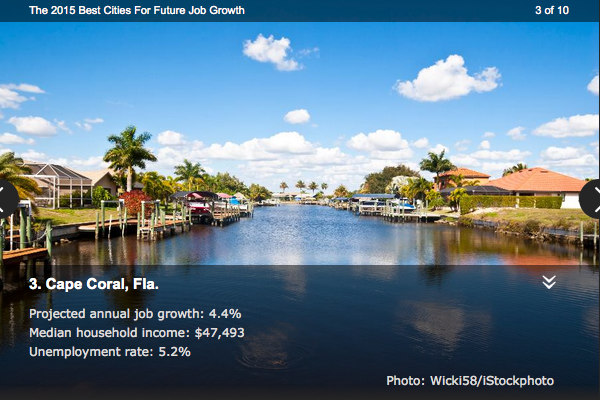 Forbes magazine has put Cape Coral on its top 2015 list of “Best Cities For Future Job Growth” in the United States. Topping the list at #3, Cape Coral has a projected annual job growth rate of 4.4 percent through 2017. Its high standing is nothing new, since Cape Coral draws kudos in numerous polls, including a recent Bankrate. com survey released in June naming Cape Coral as a top retirement location on a list of Top 10 “Best Cities to Retire in the United States.” Cape Coral is considered one of the more affordable and desirable places to retire in Florida. Cape Coral enjoys an envious median household income of $47,493. The unemployment rate is low hovering at 5.2 percent. A new ranking out this summer places Naples as the top city for job growth in the nation, along with a total of six cities in Florida appearing in the Top 10, including Naples at No. 1, Cape Coral at No. 3, Ocala at No. 5, Port St. Lucie at No. 9, and North Port at No. 10. Cape Coral is hailed for its sunny weather and year-round pleasant climate, in part, drawing people to the city for jobs. It is one of the Florida metro areas with a considerable retiree population yet also one of the fastest projected job growth areas in the United States, according to Forbes and forecasts from Moody’s Analytics. Cape Coral is one of several areas cited for creating new jobs in health care, retail, and construction to respond to the needs of retirees moving to theses communities. The fast job growth rate is also attributable to the maturing population among baby boomers who are adding to the numbers of the retirement-age population. Forbes magazine came up with its list of “Top Cities for Job Growth” by researching 200 large metro areas in the U.S. by population for its annual rankings of “Best Places for Business.” Overall, the state of Florida led the pack of job movers-and-shakers. Florida has had legislative success in lowering taxes and shedding burdensome business regulations thereby driving up the number of businesses coming into the state, and creating new jobs in cities like Cape Coral.
Tags: Cape Coral, Demographics