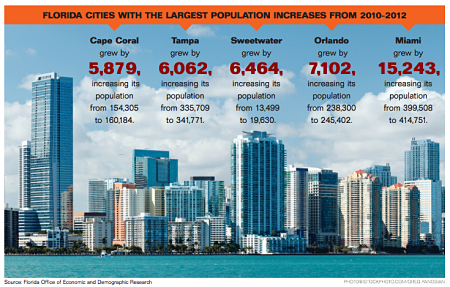 Florida League of Cities Center for Municipal Research and Innovation[/caption] Besides their Florida location, what do Miami, Orlando, Sweetwater, Tampa and Cape Coral have in common?  According to a report released by the Florida League of Cities for Municipal Research and Innovation, these five municipalities had the largest population gains from 2010 to 2012.  During this time frame Cape Coral grew by 5,879 residents from 154,305 to 160,184. Cape Coral attracts new residents for a number of reasons including affordable home prices, a year-round tropical climate and the largest canal system in Florida.  Cape Coral is a dream come true for boaters, with hundreds of miles of canals that are lined with single-family homes and condo developments. If you are interested in learning more about waterfront living in Cape Coral, here is a resource detailing Cape Coral waterfront real estate.  The Greater Fort Myers Team is available to help focus your search for a waterfront property in Cape Coral and all of Southwest Florida.
Tags: Cape Coral, demographics