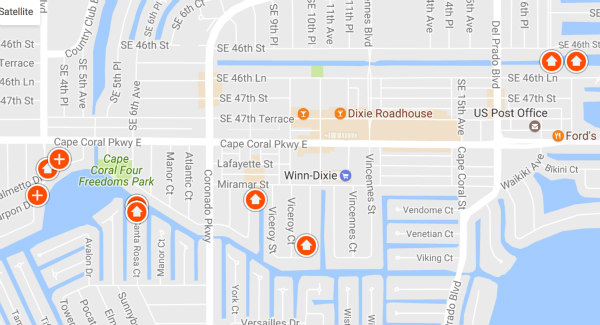 Cape Coral city leaders are eying new Community Redevelopment Agency improvements, with plans to further boost economic growth and encourage investment in the area. One of the latest plans calls for a Streetscape Improvement Project for downtown, making the area more pedestrian-friendly. The multi-million dollar traffic and road plan would generate traffic calming, street-lighting, underground utilities, landscaping and sidewalks for the entertainment district. Approved unanimously by the Cape Coral City Council in mid-February, the contract signs on with CPH Inc. for design services. That alone is expected to cost more than $600,000 and take about seven months to complete, with the entire project earmarked at about $9 million. The goal is for construction to begin by October of this year, taking about a year to complete. Proponents eye the project as a boost to Southeast 47th Terrace, a popular spot for shopping, dining and nightclubs. The Community Redevelopment Agency, or CRA, works to improve things that affect quality of life and encourage growth. In doing so, the city is able to utilize planning and financial tools, hoping to initiate private investment. Past projects of the South Cape CRA have included an underground storm water improvement project along Lafayette Street. Completed a few years ago, the new underground system collects run-off water and helps reduce pollutants from going in nearby canals. Other improvements that were part of that project included adding in new brick-paved sidewalks, on-street parking, new curbs and palm trees, making a more pedestrian-friendly, Lafayette Street. A second phase of the project added in LED lighting on the palm trees plus decorative streetlights. If all goes as planned, the new project is projected to similarly boost the entertainment district of Cape Coral, with plans to make the downtown area more friendly to pedestrians and more attractive to both residents and visitors alike. Want to invest in this part of Cape Coral before prices increase due to all the improvements, here is a resource to explore CRA District Condos currently listed for sale.
Tags: Cape Coral, Cape Coral CRA District, Urbanism