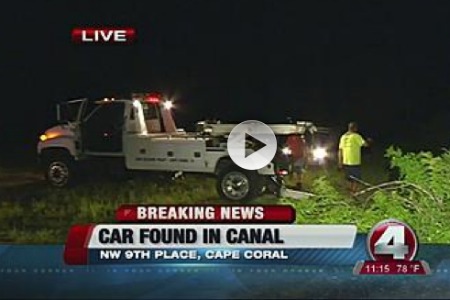 Is it just me or does it seem that every time I watch the news, one of the lead local stories is a report about a car being driven into one of Cape Coral’s canals. It sure came to me as a surprise that some of the most careful drivers on the road live in Cape Coral, according to a report by Allstate Insurance Company. Cape Coral ranks #15 for safest drivers in 200 large American cities when it comes to car accidents. Cape Coral is the safest city in all of Florida. In its 10th annual Best Drivers report recently released, the average driver in Cape Coral will experience a car collision every 11.8 years. Top honors for the safest drivers in the U.S. goes to Fort Collins, Colorado, the fourth year in a row that the city has enjoyed the top spot. The average driver in Fort Collins will experience an auto collision every 14.2 years is almost 30% less likely than the national average of 10 years. Rounding out the 2014 Top Cities that are least likely to experience collisions are in the west: Fort Collins; Brownsville, TX; Boise, ID; Kansas City, KS; and Huntsville, AL. The nation’s safest drivers always buckle up their seatbelts, never text behind the wheel and practice overall safe driving habits. Car accidents are one of the leading causes of death in the U.S. each year so you may want to consider moving to one of the cities with the fewest crashes, like Cape Coral. Some of the least safe cities are in Massachusetts: Worcester, MA takes the top spot with 134.8% likelihood of an accident every 4.3 years followed by Boston and Springfield---all in the Top 5. Cape Coral’s best drivers are making the communities safer places to live, work and raise families.
Tags: Cape Coral, Demographics