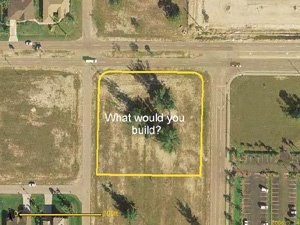 An interesting question arrived from a reader in our mail bag yesterday about what to build on a vacant commercial lot in Cape Coral. First off, the commercial market in Southwest Florida and particularly Cape Coral remains very hot. Commercial vacancy rates are in the low single digits in Cape Coral. Commercial zoning represents less than 10% of the Cape's developable land, creating significant shortages throughout the entire city. Nearly 60 percent of all Cape Coral workers have to leave each day to go to work, clogging the bridges during the commuting hours. With regards to the mail bag question, "What would you build on a vacant 1.5 acre commercial lot on Cape Coral Parkway near Chiquita Boulevard?" One of my colleagues recently met with Cape Coral Economic Development Director, Mike Jackson and asked the same question about a similar lot. The feedback from Mr. Jackson was overwhelmingly in favor of either general or medical office space. I am in complete agreement that Cape Coral needs more office space. I would welcome any feedback from any readers on this question. If you have an opinion on this please click on comments at the bottom of this post. It is painless!
Tags: Cape Coral, Commercial, Real Estate Investing, Vacant Land