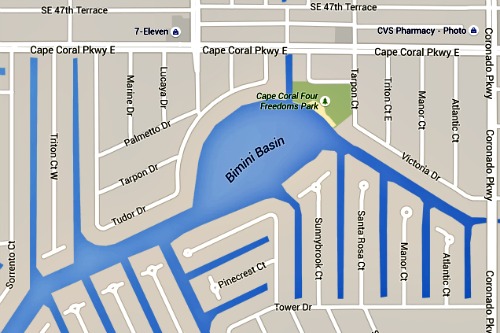 Downtown Cape Coral may be heading toward a surge in redevelopment along the waterfront, putting Bimini Basin front and center in an effort to stimulate the city’s economy. One major goal is using the park’s frontage on the basin as an opportunity to attract business and condos alike that in turn brings in new residents and creates jobs. A public meeting was held last month by city officials in which three possible plans were laid out focusing on the future of the Bimini Basin area. University of South Florida graduate students researched and conducted an analysis presenting their final plan under a $50,000 contract awarded to them by the City Council last year. The waterfront area would be for residents, businesses, visitors and tourists to eat, drink, live, work, play and shop. City Economic Development Director Dana Brunett expects some kind of compromise that will work for a developer and what the community’s vision is. Therefore, the city and the property owners located in and around Four Freedoms Park will begin working together. The idea is to come up with an overall vision that satisfies both Cape Coral residents but also enhances the downtown area. Their hope is that the entire downtown area along the Cape Coral Parkway corridor could also be enhanced. The expectation is that the basin will be anchored by a museum or research facility, but also have a mixed-use space with condos and retail. The potential plans for creating a destination at the Bimini Basin include waterfront dining, shopping, condos, water taxis, a vibrant nightlife, entertainment, hotels and landscaping. With Cape Coral embracing the waterfront and attracting business, the Cape Coral project is moving a step towards reality, after 20 years of discussion. City officials hope the project will bring in tourism dollars. The 30-acre project, a mix of public and private property, is located south of Cape Coral Parkway and west of Coronado Parkway. The USF researchers’ presentation included a large, interchangeable 3-D model and renderings of what the developer could do with the land step-by-step. More than 300 people attended the final presentation. Residents look forward to seeing a beautiful waterfront and possibly open the Rubicon Canal waterway to the other side of the parkway.
Tags: Bimini Basin, Cape Coral, Cape Coral CRA District