A Peak at the Midpoint Memorial Bridge 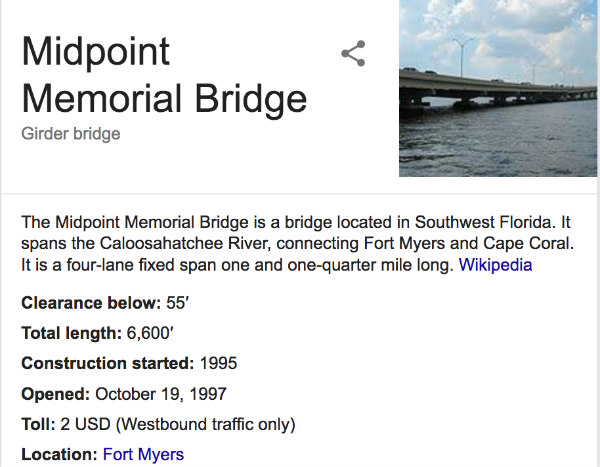 Spanning the Caloosahatchee River, it’s connected Fort Myers and Cape Coral for more than two decades, providing millions of travelers each year an easier way to travel between the two locations. In fact, it’s estimated that around 20,000 vehicles travel the Midpoint Memorial Bridge every day. Construction of the bridge cut down the commute time between the cities to nearly one-quarter of the time it used to take drivers. A big win for bridge supporters, it also opened up new opportunities for residents on both sides of the river, allowing an easier way to enjoy new shops and restaurants they’d perhaps never experienced before. The bridge was not without controversy, though. Long before the bridge even went up opponents feared it would actually harm area businesses, increase traffic and damage neighborhoods. Years later, it’s evident that many of those concerns never materialized. In particular, Cape Coral has grown substantially over time, with both new commercial and residential offerings. Fort Myers, in turn, has added several new road projects. It’s also allowed residents on one side to more easily work or play on the other. Drivers pay a $2 toll when traveling westbound, but are not charged for driving eastbound. With two lanes of traffic traveling in each direction, the 1.25 mile long bridge not only makes travel more convenient, but also supplies some spectacular views of the Caloosahatchee River. For those traveling to Cape Coral, it also offers some impressive views of the Four Mile Cove Ecological Preserve. It’s said that the bridge was named for its location, halfway between the Caloosahatchee Bridge and the Cape Coral Bridge, yet the Midpoint Memorial Bridge also pays tribute to military history. A statue representing US Marines raising the flag at Iwo Jima sits on the Cape Coral side while a Vietnam War memorial sits on the Fort Myers side.
Tags: Cape Coral