A Look Back at the Cape Coral Gardens 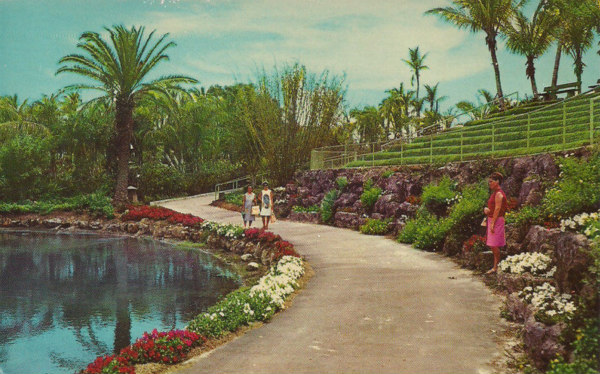 Once the destination of hundreds of thousands of visitors each year, the Cape Coral Gardens also welcomed such big names as Bob Hope, and served as a movie and commercial backdrop with grand plans for the future. While you won’t find any trace of the gardens today, the memory for some in Cape Coral still exists. Occupying more than 80 acres of southwest Cape Coral, the Cape Coral Gardens were manmade, formed to create pools, a lake, lagoons and hills. The idea began as a dream of developers Jack and Leonard Rosen in the mid 1960s, complete with an outstanding 40,000 rose bushes. In fact, the more than two-mile long Avenue of Roses served as the property’s grand entrance, complete with a tram that transported visitors throughout the gardens. The entire property was over-the-top, from a pool where dolphins once performed to a lake where the Waltzing Waters show once operated. There was also a riverside Polynesian Village, a Patriots Garden with a replica Iwo Jima statue, a children’s garden, a hanging garden and an Italian garden. In addition, A Japanese garden was filled with arched footbridges and floating blossoms. The five million dollar project was extravagant in every form, bringing in big names to add to its appeal. Bob Hope was once honored on the lake stage as “Patriot of the Year”. Meanwhile, the garden peacocks were featured in the 1960’s movie ‘The Fat Spy’ and the reflecting pool once served as the setting for the filming of an Oldsmobile commercial. The popular destination, unfortunately, did not last. The gardens closed and were deemed unprofitable. Then the property fell into disrepair, though the original site has since been transformed into what’s now Tarpon Point. Not all was lost, though. The Iwo Jima statue now sits at Veterans Memorial Park and some of the presidential busts that once stood on the grounds are now on display at the Cape Coral Museum of History, serving as reminders of gardens that once stood in the area, yet no longer bloom.
Tags: Cape Coral, rose garden, Tarpon Point