$1B Casino Targeted for the Forum 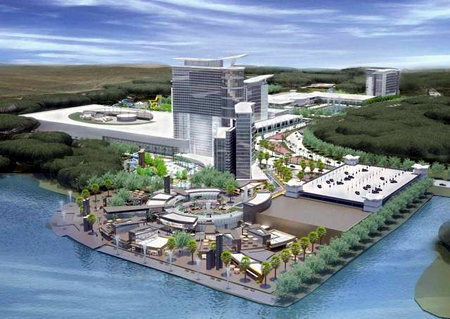 The News-Press reports that a developer is targeting a 57-acre parcel at the Forum in Fort Myers for a $1B gaming resort.  The project would include 1,500 hotel rooms, 300,000 SF of convention space and 400,000 SF of retail stores and restaurants. A casino in Lee County would require a both the approval of the general public via a ballot question as well as from the state legislature.  An Atlanta-based consultant is in the process of collecting the approximately 24,000 signatures required to put this project on the November ballot.  It is estimated that 10,000 - 15,000 construction jobs would be created for the project.  The developer is proposing that a one percent tax be assessed on gaming revenue that would go to the general revenue fund of Lee County. The Forum is a mixed-use development with retail office space and residential housing located at the intersection of I-75 and Colonial Boulevard in Fort Myers.  The project draws its name from the Los Angeles Lakers basketball stadium as then head coach Pat Riley was involved as an investor in the project. While the issue of a gambling facility in Lee County is controversial, there is no doubt that this development wold be major game changer for the region.  Tabled infrastructure like the Colonial Boulevard elevated highway would probably get fast-tracked to provide access to the Forum for Cape Coral's 150,000 residents.  The western end of Lehigh Acres would likely prove attractive for the gaming resort's workforce.  Developments in close proximity to the Forum area like Colonial Country Club, Pelican Preserve and the entire Treeline Corridor would become a must-have location. Today, the residential component of the Forum development includes the gated townhouse community of the Colonnade at the Forum and the single-family community of the Promenade at the Forum.
Tags: Colonial Boulevard, colonnade at the forum, Fort Myers, Lehigh Acres, promenade at the forum, Treeline Corridor

Once again, Fort Myers is tops when it comes to “The Best Places to Retire”. The newly released list from US News & World Report ...Read More